Brett Swierczewski a, Andrey Filippov a, Anna Jacobs a, Yunxiu He a, Amanda Ward a, Helen Freyberger a,
Emily Engeman a, Samandra Demons a, Derese Getnet a, Stuart Tyner a, and Mikeljon Nikolich a

Wound infections caused by multidrug resistant (MDR) Gram-negative bacteria to include the ESKAPE pathogens ( E nterococcus faecium, S taphylococcus aureus, K lebsiella pneumoniae, A cinetobacter baumannii, P seudomonas aeruginosa , and E nterobacter spp) are a persistent challenge as antibiotic treatment options become limited and the development of new antibiotics more rare [1]. As combat wounds are characterized by penetrating trauma and foreign body inocula, the increase of ­ESKAPE pathogens in complicated MDR combat-related wound infections to include burns and fractures are of particular concern as variants have emerged with resistance to carbapenems which are typically last line treatment. It is estimated that over 52,000 U. S. service members were wounded during Operations Enduring Freedom and Iraqi Freedom (OEF and OIF) and that 49 % of those wounded had bacteria within their wounds, 34 % of combat casualties developed MDR bacterial infections during their initial hospitalization [3]. Due to the rise on these resistant bacterial infections, the U.S. Army began to explore alternative therapeutics besides antibiotics for treatment of MDR combat wound infections.

Bacteriophage cocktails in development for ­treatment and prevention

The Wound Infections Department (WID) located within the Bacterial Diseases Branch at WRAIR 1 has implemented a rational design strategy for the development of durable, fixed bacteriophage cocktails that can be used as both – therapies in combination with conventional antibiotic drugs or as preventatives to treat and prevent MDR infections that afflict U.S. Military service members during deployment and combat. This was in direct response to the significant increase in MDR wound infections seen in U .S. service members wounded in OIF and OEF. Additionally, international health agencies consider antimicrobial resistance (AMR) to be an immediate threat to human health. Antibiotic overuse, misuse and globalization have accelerated the emergence of multidrug resistant organisms on every continent and that far too little progress has been made to reverse the AMR pandemic.

The main thrust of WRAIR’s effort in recent years has been focused on the development of standardized, durable bacteriophage cocktails for the treatment of MDR P. aeruginosa and K. pneumoniae respectively . 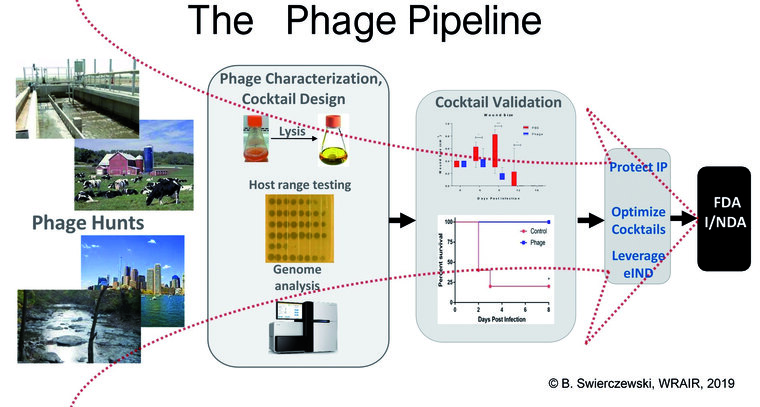 To date, over 200 phages meeting the criteria above have been isolated against P. aeruginosa, K. pneumoniae, S. aureus, E. cloacae, and also for the diarrheal pathogen, Shigella spp. Bacteriophages are tested for lytic activity in vitro via plaque assays against a global diversity panel of the above bacteria respectively provided by Multidrug Resistant Organism Repository and Surveillance Network located at WRAIR [4]. Two phage cocktails for P. aeruginosa are the most advanced showing high levels of lytic activity against P. aeruginosa clinical isolates and 100 % protection in a pre-clinical mouse septicemia model.

Custom cocktails from the P. aeruginosa phage collection at WRAIR have been produced and have been used in two Emergency Investigational New Drug (eIND) cases in patients with pan resistant P. aeruginosa infections. Due to the lack of randomized clinical trials (RCTs) for bacteriophage therapy, participation in eIND cases is helpful in gaining critical information about phage therapy, but are not replacements for a sufficiently powered RCT.

In conclusion, the development of broad-based, fixed phage cocktails will continue to be pursued and refined for the treatment of combat wound infections. The continued development of bacteriophage candidates and the testing of these cocktails in randomized clinical trials will enable physicians, researchers and outbreak response teams to effectively treat MDR wound infections in the future.

Setting  up a collaboration with the Bundeswehr Institute of Microbiology

At the first “Phage Meeting” organized by the Bundes­wehr Hospital Berlin in December 2019 initial contact was made between the WRAIR phage therapy group and the Bundeswehr Institute of Microbiology (IMB ). This was followed by a visit to WRAIR, as a part of a visit of the new IMB director. At this occasion possibilities to support the development of bacteriophage therapeutics against MDR bacteria were discussed. Currently the process of setting up a collaboration focusses on infections with K. pneumoniae of Type 4 MRGN. An exchange of material and personel, joint publications, as well as more formal collaboration between the institutions are planned for 2020/2021.

1The Walter Reed Army Institute of Research (WRAIR) located in Silver Spring, Maryland, United States, is the largest biomedical research facility administered by the U.S. Department of Defense (DoD) and aims to conduct biomedical research that is responsive to DoD and US Army requirements. WRAIR’s mission is to discover, design, and develop solutions for military relevant infectious disease and brain health threats through innovative research protecting and optimizing warfighter lethality. WRAIR’s partners with a multitude of collaborators within the DoD and other U.S. government agencies as well as partners in industry, foreign militaries and government agencies, academia and non-governmental organizations (see also www.wrair.army.mil).