Soldier selection and training standards have continued to evolve with changing Army needs and the advance of science and technology. Previously, size selected out weak individuals who were chronically malnourished or had tuberculosis. With advances in nutrition and science this changed to upper limits of body fat to prevent obesity in the 1980s [4]. While the lean mass of young male soldiers increased by an average of 14 kg between 1864 and 2000, the 2000 data also demonstrated increasing overweight with age. Even with enforced body fat standards, an average 7 cm increase in abdominal circumference was observed in 25 year old soldiers between 1984 and 2000 (see figure 1), in parallel with the rise of personal electronics and electronic games and reduced time spent in physical activity [3]. Reduced physical fitness, increased musculoskeletal injury risk, and greater adiposity are interrelated factors more frequently observed in “digital native” Army recruits.

Two mile run time has been used as a practical measure of aerobic capacity and, as a key metric by which individuals are graded, Army physical training has included a large focus on running. However, many of the physical tasks in the Army require strength for lifting and carrying, and aerobic capacity is only one component of the actual fitness requirements of a soldier. A new six component test, the Army Combat Fitness Test (ACFT ) has been developed with the specific intention of promoting a wider range of militarily relevant physical training activities; a phased implementation of this test is currently underway (see figure 2). An emerging trend in new recruits appears to be “skinny fat” individuals who do not appear to be overweight but have greater than expected fat because they are deficient in lean mass . Low body mass index is associated with increased musculoskeletal injury and deficient lean mass may limit strength trainability. Concepts for future body composition standards include a greater focus on minimum lean mass metrics and less concern for the body composition of large but very fit soldiers who excel in the ACFT. 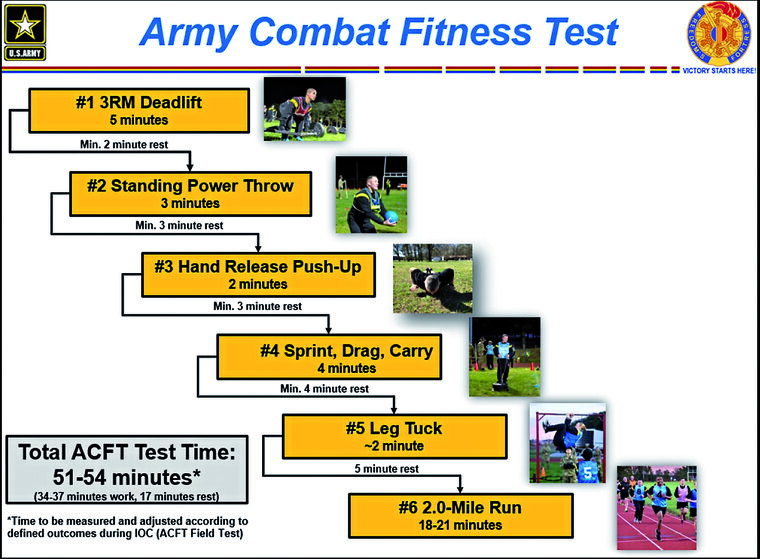 The Science of Physical Training and Selection

The 21st Century will be marked as a period of science-­based standards, where more fundamental understanding of human biology contributed to well validated selection and training criteria that directly improve the capabilities of the Army’s individuals and teams. As one recent example, a series of seven studies conducted over four years, systematically evaluated the critical physical tasks in selected Army job specialties, defined and quantified the physical demands, determined appropriate test measures for these tasks, and then devised a practical generalizable set of tests (the Occupational Physical Assessment Test – OPAT) that can be used to classify individuals for Army jobs [2]. Initial field validation data indicates that the OPAT is performing as intended and that performance on the test is directly related to musculoskeletal injury and attrition rates of new soldiers in their first two years after basic training. A major challenge, currently under study, is to define the modifiable musculoskeletal injury risk factors in initial entry training, without reducing the effectiveness and intended benefits of training, and including specific risks to female soldiers created by the way physical training is conducted. Better mechanistic understanding of the balance between aero­bic and strength training are also needed [5].

Concepts of Health and Fitness Trainers

Modern armies have experts trained in equipment maintenance but, except for the British Army, few armies give the same importance to “human maintainers.” The U.S. Army has explored the use of physical therapists to provide injury prevention and early treatment in some specialized units but for most of the force, the military leadership directs the physical readiness training of their soldiers. 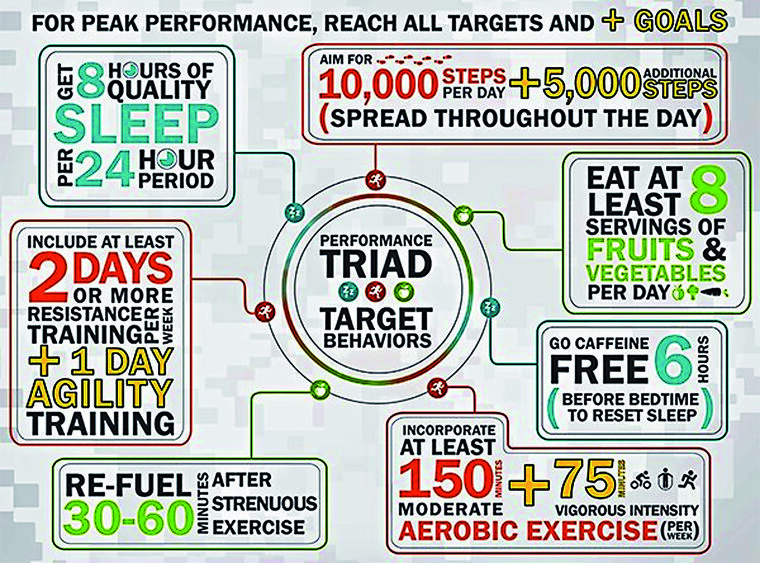 Any implementation of brain readiness training such as mindfulness techniques is also left to the leadership, and there is no formalized equivalent to the “Techniques ­d’Optimisation du Potentiel” (TOP) program on mental preparation for French military forces [6]. However, in 2013, the Army initiated the “Triad” program focused on sleep, activity, and nutrition behaviors (see figure 3). This included the use of wearable monitors to provide motivational feedback to individuals and to provide metrics of success. Triad successfully elevated physical and mental health readiness into the top priorities of the Army for enhancing soldier effectiveness [1].

The opinions and assertions in this abstract are solely those of the author and do not necessarily represent an official position or policy of the Department of the Army.