b University of Freiburg Medical Center and Faculty of Medicine, Freiburg, Germany

Tick-borne encephalitis (TBE) is the most important vector transmitted viral infection in Europe. The disease is caused by the tick-borne encephalitis virus (TBEV), a member of the Flaviviridae family. For TBE no causal treatment is known but the available inactivated vaccines provide good protection. TBE-diagnosis is mainly based on the serological detection of specific antibodies against TBEV. So far , the core challenges in TBE-diagnosis are the lack of distinguishability between vaccination induced and infection induced antibodies and the strong cross­-reactivity with other flaviviral infections or vaccinations. In this study a new TBEV antibody ELISA based on the non-structural protein 1 (NS1) was presented. The new ELISA was validated for use in accredited diagnostic ­laboratories according to the European norm DIN EN ISO 15189. Sensitivity and specificity were determined, in particular regarding to the differentiation between vaccination induced and infection induced antibodies as well as the robustness against potentially cross-reacting ­patient’s sera.

Samples were received from TBE patients, patients with other confirmed disease (including other flavivirus infections), TBE vaccine recipients and patients vaccinated against other flaviviruses (YFV, JEV). To avoid false positive results, during test establishment a cut-off control (YFC) was introduced before starting the sensitivity and specificity studies. 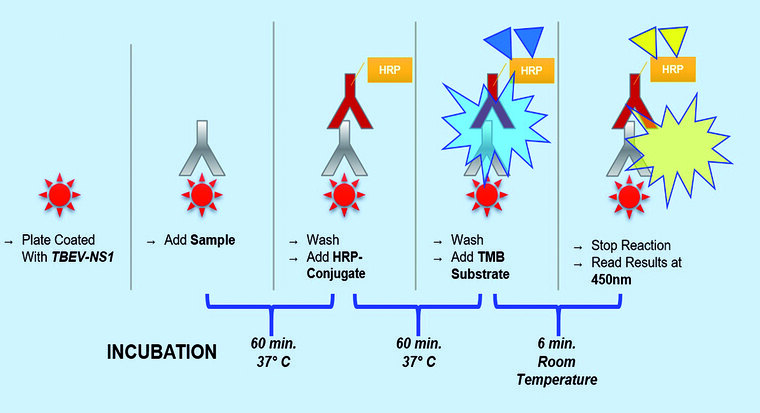 Figure1: Illustration of the procedure.

Among the 71 patients acutely ill with TBE, 67 were tested positive for NS1 specific IgG antibodies, resulting in a sensitivity of 94.37 %. All but one TBE-seronegative patient tested negative in the NS1-ELISA (specificity 97.06 %). Furthermore, 49 TBE-vaccinees with verified IgG antibody titres were tested, all showed no reactivity in the NS1 IgG ELISA (specificity 100 %). To evaluate possible cross-reactions with other flaviviruses, 9 sera from patients acutely ill with DENV infection, one patient acutely ill with WNV infection, one JE-vaccinee, and 19 YF-vaccines were tested. With one exception, all DENV, WNV and JE positive samples tested negative for NS1 specific IgG antibodies, indicating a specificity of 90.91 %. Slight cross-reactivity occurred in YF vaccinated patients. Four of the 19 tested sera showed weak reactivity in the TBEV NS1 ELISA. Thus, specificity within this group was only 73.68 %. The overall specificity across all tested specimens was 93.81 %, accuracy was 94.02 %, the ­positive and negative predictive values (PPV/NPV) were 90.54 % and 96.36 %, respectively.