Human health behavior often seems irrational: although the benefits of a healthy lifestyle are well known, for example, only about one third of the EU population achieves 150 minutes of moderately strenuous endurance activity per week as recommended by the World Health Organization [10]. In addition to physical inactivity, excessive alcohol consumption, smoking and unhealthy eating habits are also widespread in the population [16]. Negative consequences of this unhealthy lifestyle are performance deficits, an increased tendency towards overweight and obesity, and an increased risk of various non -communicable diseases, such as cardiovascular disease, type II diabetes and certain types of cancer [2][13].

This societal trend also has consequences for the Bundeswehr: The “General Check-up for Aptitude – Individual Basic Capabilities” ( AVU-IGF ), introduced on January 1st, 2019, shows that, already in middle age, a considerable proportion of soldiers has health problems of such magnitude that they are deemed unable to participate in the yearly tests of basic military capabilities and physical fitness [11]. Of the 40- to 49-year-old soldiers, only about 75 % are sufficiently healthy, in the age group of the over- 50-year-olds less than 40 % are [11].

Soldiers are obligated to take part in sports on duty (“Dienstsport”)[1]. In addition, as part of the corporate health management program, all Bundeswehr personnel have access to a wide range of health promotion services designed to initiate and/ or support lifestyle changes. These include nutrition and exercise programs, smoking cessation seminars and stress management courses, for example. The current AVU-IGF results illustrate, however, that these existing behavioral preventive measures are not sufficient, especially against the background of demographic change.

Outside of the Bundeswehr, behavioral prevention measures are often ineffective because they are underused and do not reach the intended target group [6]. People with unhealthy lifestyles rarely make use of prevention offers [12], even though they stand to benefit the most from them [3]. In addition, what is lacking is often not the willingness to change, but rather perseverance: for most people it is difficult to achieve lasting health behavior changes. This is due to habits, decision- making heuristics, and perceptual distortions, which are the subject of research in behavioral economics, among others. Behavioral economics combines findings from psychology and economics to identify rationales in seemingly irrational behavior.

A core thesis of behavioral economics is that people make decisions not only based on rational cost-benefit considerations, but rather on estimations regarding the probability of events occurring [ 9]. In this, they prefer guaranteed gains and avoid guaranteed losses. Against this background, it becomes clear why lifestyle changes are so difficult to achieve: They represent the guaranteed immediate loss of familiar but unhealthy lifestyle habits in exchange for a merely potential future gain of health and additional life years (see Figure 1). 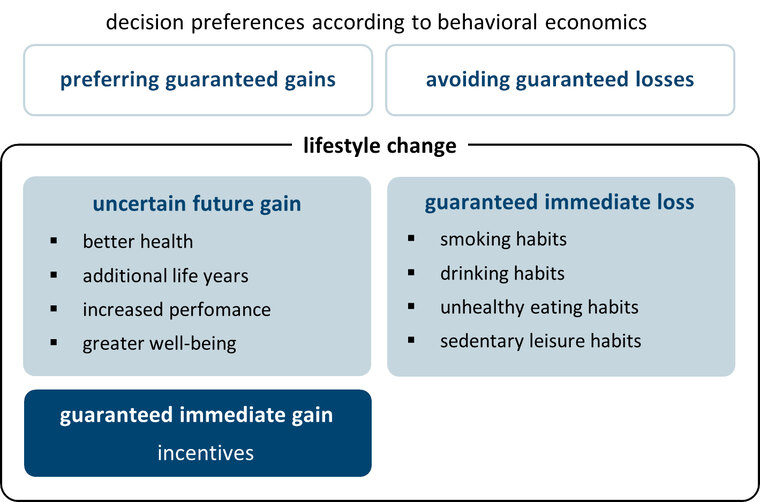 Fig.1: According to behavioral economics, sustainable lifestyle changes are difficult to realize because they run counter to human decision-making preferences: An uncertain future gain cannot compensate for the guaranteed immediate loss of familiar habits. Incentives are effective because they link lifestyle changes to a guaranteed immediate gain.

To offset this imbalance, incentives are increasingly used in the field of behavioral prevention. Incentives link lifestyle changes to a guaranteed immediate gain and thus facilitate them (see Figure 1). An example of this are the bonus programs of the statutory health insurance funds, which offer non-cash prizes, vouchers, or refunds as incentives for participating in behavioral prevention measures, such as sports courses. These bonus programs are effective: Those who collect bonus points use behavioral prevention offers more frequently and as a result generate significantly fewer sickness costs [7][15].

Although the bonus programs of the statutory health insurance funds are effective, they also show deadweight effects [8]. That is to say that some participants of bonus programs are already health-conscious to begin with and are thus being rewarded for something they would have done anyway . Such deadweight effects underline the importance of a target-group -specific design for the effectiveness of incentive systems. In the military context, different types of soldier motivation must be considerd when selecting possible incentive options, for instance. Existing incentive systems in the Bundeswehr use (1) social recognition (medals, career benefits etc.), (2) compensatory time off (e.g., special leave) or (3) material benefits (special pay, non-cash prizes etc.) as incentives. As rank groups differ in terms of their need orientation [4], the effectiveness of these incentive options will also vary across rank groups, for example.

Incentives cannot substitute for intrinsic motivation. Thus, some behavioral changes achieved with the help of incentives only persist until the incentives are removed [14]. Incentives should therefore be used primarily to initiate behavioral changes. Additional measures are required to consolidate these behavioral changes, for example in terms of establishing healthier habits. Particularly anchoring can be helpful in this respect, i.e., the fact that behavior is strongly influenced by reference values [ 5]. Such reference values can be social norms, for example: behavior that corresponds to social norms is shown significantly more often. For the consolidation of a healthy lifestyle, it is therefore helpful to establish it as a norm in the immediate social environment of the target group.

Operational Readiness as a Military Norm

In conclusion, incentive systems can also be used within the Bundeswehr to improve health behavior and individual operational capability. Prerequisites for an effective incentive concept are, however, (i) a target group-oriented design of incentive options, (ii) the parallel implementation of consolidation measures, and (iii) the involvement of personnel and executive levels (see Figure 2). 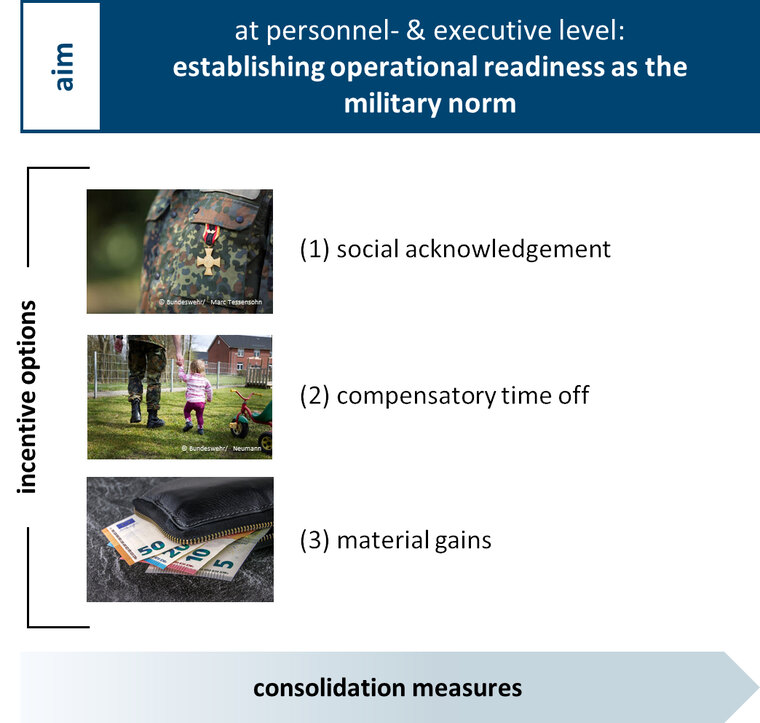 Fig. 2: Prerequisites for an effective incentive system to improve health behavior and individual operational readiness in the Bundeswehr are the target-group-oriented design of incentive options, the parallel implementation of consolidation measures and the involvement of personnel and executive levels.